A look at some numbers on guns in Santa Clara County

On the eve of a workshop on how to address firearms in Santa Clara County, the county public health department released a raft of gun statistics that are intended to help inform the discussion at the county fairgrounds on Saturday, April 28, 2018.

Unfortunately, the numbers provided mostly offer only limited insight because they measure only county firearm stats, leaving no basis for determining how the county’s firearms numbers compare with surrounding counties, the state as a whole and the nation.

But there are a couple of charts that offer some worthwhile broader perspective, and so I’ll focus primarily on those in this post: 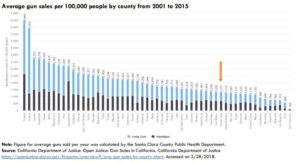 But even though these numbers still fail to answer some basic questions, they do contain some interesting data, and the timing in the wake of the Marjorie Stoneman Douglas High School shooting and other tragedies. The observations that jumped out at me: 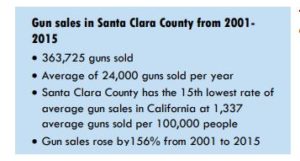 Other stats released by the Santa Clara County Public Health Department in advance of the summit workshop look at the county’s deaths related to firearms, hospitalization rates for firearms injuries and emergency room visits for gunshots in the decade from 2007-16.

Saturday’s workshop is hosted by County Supervisor Dave Cortese. The DA’s office, the American Leadership Forum, and other partners will be there. Attendance and parking are free. Box lunch included.

Details: County of Santa Clara Community Summit on Firearms and Safety from 8:30 a.m. to 4:00 p.m. on Saturday, April 28, at the Santa Clara County Fairgrounds located at 344 Tully Road in San Jose.