I’m including this in my portfolio because I just really love the intriguing congressional matchup between an incumbent Holocaust survivor and an Arab American Muslim in the immediate aftermath of the 9/11 terror attack. I think I was the first mainstream American news reporter to highlight this race. Mr. Ghazalah, not surprisingly, got crushed. See the note I’ve appended to the end of this post (where I acknowledge an embarrassing spelling error) and provide further background updating the story. 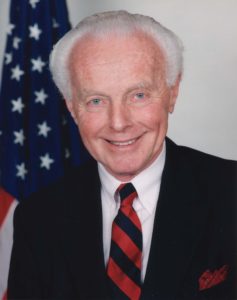 At a time when some Arab Americans and Muslims are lying low amid a perceived backlash in the wake of Sept. 11, Maad Abu-Ghazalah is doing quite the opposite. He’s running for Congress.

His opponent is Tom Lantos, one of Israel’s strongest supporters and a Holocaust survivor who has been elected 11 times to represent the 12th District on the upper San Francisco Peninsula.

Abu-Ghazalah, a 39-year-old software entrepreneur and attorney from Pacifica, was born in what was then part of Jordan.

He’s running as a Libertarian. Normally, Libertarians are all but ignored by the major-party candidates, the mainstream media and political contributors. But, as Abu-Ghazalah said, with their sharply contrasting backgrounds, this matchup is “made for TV, almost.”

That, combined with his determination to force a deeper discussion about why America finds itself fighting a war on terrorism, and whether Americans are giving up too much freedom in that war’s prosecution, makes this contest anything but run-of-the-mill.

Lantos, who was in Washington this week as a busy Congress rushed to break for the holidays, did not return calls about the race.

Abu-Ghazalah is a novice in electoral politics, but he’s a member of the board of the American-Arab Anti-Discrimination Committee. This week he spoke at a news conference to keep attention focused on the hundreds of people being held without charges by the FBI as part of the terrorism investigation. Abu-Ghazalah said he was thinking of running even before Sept. 11, but the aftermath pushed him into the race despite the long odds and his controversial positions.

Shortly after the hijacked planes slammed into the World Trade Center and the Pentagon, Abu-Ghazalah said, he was appalled to hear that only 70 percent of Americans polled said the United States should make sure it knows who is responsible for the attack before striking back. It made him wonder about the other 30 percent of Americans.

“We just needed to bomb somebody,” he said. “There was some level of that all over.”

He also has watched in alarm as, in his view, constitutional protections and legal rights have been eroded “with virtually no discussion.” As an attorney, Abu-Ghazalah is especially outraged by Attorney General John Ashcroft’s announcement that the Justice Department would be monitoring communications between defense lawyers and certain terrorism suspects.

“Civil liberties have just been hacked to pieces,” he said.

Abu-Ghazalah’s main foreign policy message — that billions of dollars in annual U.S. aid to Israel should stop — may win favor with voters who don’t like foreign aid of any kind. But if polls are correct, he might not win many supporters with the centerpiece of his domestic agenda: the protection of civil liberties during the war on terrorism.

“Whether people like the message or not, I think it´s important that they hear it,” he said.

Win or lose, Abu-Ghazalah is doing something important, said Abdallah Al-Zuabi, national field director of the Arab-American Institute, which has sought to increase Arab-American participation in the political process for 15 years.

Recognition of the need for Arabs to get more involved in politics “was a hundred times more after 9/11,” Al-Zuabi said, but at the same time, many have felt too intimidated to speak out. “To have Arab Americans running for Congress and talking about these issues will encourage other Arab Americans to do so also, so it has a positive effect.”

Abu-Ghazalah is taking a classic third-party approach and must know he can’t win, said Jack Pitney, a professor of government at Claremont-McKenna College in Claremont. But his background could work for him.

“Even a more mainstream candidate with a lot of money wouldn´t stand much of a chance against Lantos,” Pitney said. “He´s a respected Democratic incumbent in a Democratic district. The question is whether he (Ghazalah) can get a fair hearing for his point of view.”

Lantos, who has a strong record on human rights, may be a friend of Israel, but that doesn’t make him an enemy of Arabs or Arab Americans. In fact, when the FBI uncovered an alleged plan by a leader of the radical Jewish Defense League last week to bomb a Southern California mosque and an office of Arab American Rep. Darrell Issa, R-San Clemente, Lantos was at Issa’s side to denounce the terrorist plot. Abu-Ghazalah believes American policies in the Middle East — of which Lantos is an influential architect — are one of the root causes of rampant anti-Americanism. Those policies don’t begin to justify the terrorist attacks on the World Trade Center and the Pentagon, though, he said.

Lantos holds a different view of the cause of the terrorist attacks.

“Osama bin Laden would have us believe that the United States’ continued presence in Saudi Arabia, our sanctions policy against Iraq or even our posture in the Israeli-Palestinian conflict — a cause to which he only recently converted — provoked and justified these terrorist acts. Let no one be deceived by the cynical and hateful rhetoric,” Lantos said at a congressional hearing Oct. 24.

“It is our open, democratic, inclusive, free way of life that is the true object of his hatred,” he said. “The terrorists hate America not for what we do, but for who we are.”